Posted By: Raine Gardner in Blog,

The Baraboo River in south-central Wisconsin is the longest restored free-flowing river in America, with hopes to become nationally designated as such. Since the last of the dams were removed in the early 2000s, the river is on its way to becoming a premier water recreation destination and a rousing model for multi-community and multi-jurisdictional collaboration.

The story of the Baraboo River Corridor Project has been moving swiftly through Juneau and Sauk counties in Wisconsin and transforming this once sleepy part of the state into a burgeoning eco-tourism destination.

It all began with a Phase I River Corridor Plan developed by MSA in the spring of 2016. The plan focused on the stretch of the river between Baraboo and North Freedom to improve water quality and enhance recreational use. It targeted the creation of canoe and kayak launches, fishing access, ADA-accessible landings, shoreline protection and fish habitat development. Travelers and water recreation enthusiasts began to take notice, and municipalities along the route noticed an uptick in visitor traffic. One of the first recommendations of the plan to be implemented was a to develop a ‘Friends’ group — the Friends of the Baraboo River — which was established to promote the river corridor, help manage/maintain the river and ensure the financial realization of the corridor’s potential.

After completion of the Phase I Plan, a market study of the area was completed by MSA in 2018. The study looked at both the economic development and tourism potential of the river corridor, as well as environmental and accessibility needs within the beautiful natural amenities the region already offered. The key discovery was that the Baraboo River needed additional support to realize its potential as a premier water recreation destination. It needed a broader plan to sustain and protect its ecological health but also presented an opportunity to connect more communities, and people, along its path.

The market study identified an increasing potential for population and tourism growth within the area, and a means to restore and grow residential, economic and job opportunities. MSA discovered that nearly 20 million people were living in urban centers within 225 miles of the Baraboo River corridor. This untapped population needed only to be aware of all the opportunities the corridor had to offer. 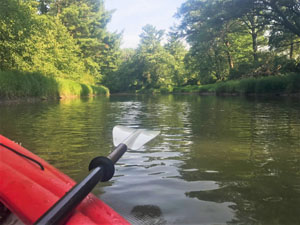 With the success of Phase I, communities upriver began to take notice, and the City of Reedsburg reached out to the Friends group and to MSA to begin development of Phase II. This phase added the support of Rock Springs, Reedsburg, LaValle, Wonewoc, Hillsboro, Union Center and Elroy, along with Juneau and Sauk counties. It focused on the Phase II corridor section and each community specifically, each with a strong catalytic potential to enhance recreational opportunities. The plan also provided detailed recommendations related to marketing, public/private partnerships, funding, land and development, and best practices for stormwater management and improving water quality.

With Phases I and II complete, the Friends of the Baraboo River group is now taking steps forward to both promote the corridor as well as to help develop the various proposed projects identified in the plans. The organization has also taken on many different initiatives aimed at making the Baraboo River Corridor a recreation destination, such as hosting river-related events, organizing river clearing gatherings, purchasing equipment for clearing, and boosting fundraising and general promotional efforts.

To date, individual communities have completed recommendations such as installing ADA-accessible canoe and kayak launches and completing much-needed shoreline stabilization work. Approximately $1.2 million in grant funding has been secured for $2.3 million of projects recommended in the Baraboo River Corridor plans.

Raine Gardner, PE, is a senior project engineer and the Parks and Recreation practice leader at MSA Professional Services, Inc. (MSA). She also serves on the firm’s board of directors and was selected as one of five national recipients of the ACEC Young Professional of the Year Award for 2018. MSA a 100% employee-owned, full-service multidisciplinary consulting firm serving clients throughout the U.S.