Posted By: Brian Pehl in Blog,

The Bark River Restoration in Delafield began as a volunteer effort by the Friends of the Bark River community group, who were seeking to clean up the river and make this natural feature more accessible and inviting to users. Yet, volunteer work could only take it so far. As hopes and goals grew, the City of Delafield became involved and widened the project scope.

The City recognized eroding banks of the Bark River and an adjacent park pond, and there was concern that critical parts of the banks might structurally fail. The City also saw an opportunity to transform this central downtown area into a safer and more inviting area for walkers, bikers, canoers, kayakers and fishermen.

First, the project team needed to overcome several challenges. As Delafield's city engineer, SEH needed to factor in many different visions to provide a cohesive, practical project plan. Second, the City needed to understand their funding options because their budget was limited. Lastly, this project was highly visible and would transform the downtown portion of the Bark River, so the City needed a partner who could lead educational public engagement efforts while providing the needed care to the river, surrounding banks and land area. 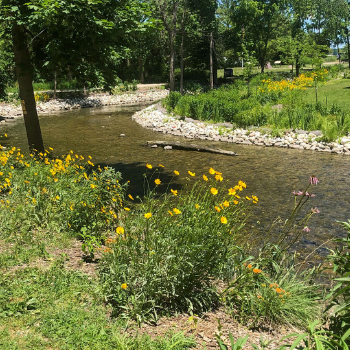 The project was a collaboration between City of Delafield staff, the Friends of the Bark River, landowners along Bark River, the Park and Recreation Commission, the Common Council and SEH. The SEH team offered a strong relationship and history with the City, experience in riverbank restoration and park development in sensitive areas, and the ability to uncover funding opportunities.

Funding was perhaps the biggest challenge. To address this, SEH worked with the Wisconsin Department of Natural Resources (WDNR) to uncover options and opportunities. Given the project’s prominence within the City’s downtown and potential to nurture the river and environment, the team was able to secure a Wisconsin DNR Stewardship fund; this fund’s matching grant supported both land acquisition and improvements to the downtown area.

With funding and a strategic scope in place, the City and project team went to work on three main elements:

Riverbank restoration. The project team restored the streambank using stone along about a quarter mile of the Bark River, which represented the entirety of the river’s flow through downtown Delafield. The team also provided structurally sound restoration to the neighboring park pond and a wider and more stable path that provides maintenance access to the Nagawicka Lake dam. More than ten thousand native plants were hand-planted along the riverbanks. Strategic and careful tree clearing provided more natural light for the native plants.

Exposed pipe burial. This effort involved safely and securely burying an exposed pipe that crosses the river to feed freshwater into a fish hatchery pond. Burying the pipe allowed unimpeded access to canoes and kayaks while maintaining the clean water being carried to the fish hatchery. The project team used the WDNR-approved, open cut trench method to bury the pipe. This involved excavation beneath the river after briefly damming the flow, burying the pipe and backfilling with native soils, and re-establishing the native river bottom.

The project team’s public engagement efforts showcased the improvements being made, helping City residents and stakeholders become aware of the safe, free recreational opportunities available to them. This area of Bark River has since become a widely used and enjoyed central park area, featuring structurally sound river and pond banks that will stand the test of time.

READ MORE ABOUT THE PROJECT

WATCH A VIDEO TO LEARN MORE

Brian Pehl, PE is an associate and project manager with 22 years of stormwater management expertise who specializes in municipal services and land development projects. At Short Elliott Hendrickson Inc. (SEH®) we’re simplifying the world’s complex challenges by improving mobility, designing better places, engineering clean water and renewing infrastructure. As a longtime member of ACEC Wisconsin, SEH is backed by 800+ professionals in 31 offices across the Midwest and Mountain West, including nine offices in Wisconsin.

Back to blog home