Posted By: Daniel Sydow in Blog,

Eau Claire has long been known as a “city of bridges” at the confluence of the Eau Claire and Chippewa Rivers. For more than 150 years, river crossings have connected this community, each a reflection of the industrious people who built them, each adding a chapter to the storied history of the Chippewa Valley. 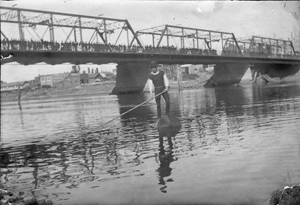 Grand Avenue pedestrian bridge is no exception. The structure earned its familiar, fond local standing through more than a century of service as a popular route between downtown’s commercial district and west-side parks, schools, churches, and residential neighborhoods.

Unfortunately, the bridge along the well-beaten path had begun to show its age in recent years. A pitted and broken concrete deck surface was no longer steady underfoot, nor aesthetically attractive. Peeling paint and dated features also juxtaposed the bridge with recent downtown improvements and surrounding revitalized architecture. 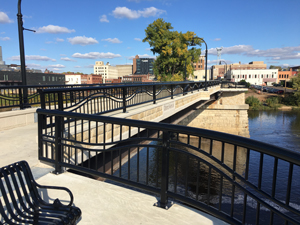 In 2018 the City of Eau Claire set out to extend the bridge’s service life and update its look to complement the vibrant downtown it serves. The City also sought to prepare Grand Avenue pedestrian bridge for an enhanced role as an outdoor community space, a downtown destination in and of itself.

They pictured the bridge as a place where commuters could pause for exceptional views, a welcoming venue for guests to participate in special events, festivals, and other public gatherings.

To achieve these functional and aesthetic goals while preserving an irreplaceable historic landmark, engineers conducted detailed evaluations to ensure that existing features, including massive limestone piers and steel girders, could be safely incorporated into the rehabilitated bridge. Their findings confirmed these elements were sound, requiring only minor maintenance to continue providing the structure with reliable support and save costs for the City. 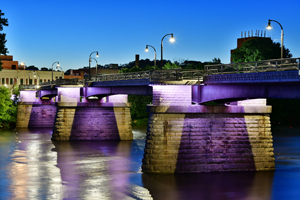 The design team also performed specialized analysis of strength and vibration dampening contributions from the steel girders, concrete deck, and concrete parapets. The City reviewed detailed comparisons of bridge capacity and user comfort at various width and railing configurations, and collaboratively chose the new design which replaces and widens the deck by 20 percent.

In addition, the bridge has been successfully transformed into an ideal spot for community gatherings, including “A Grand Evening on the Bridge,” an elegant local fundraiser with music, drinks, and dining that supports continuation of free downtown entertainment throughout the year. 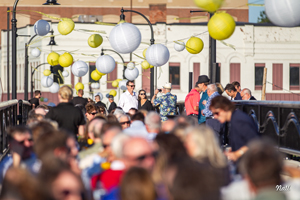 An outstanding balance of performance, practicality, aesthetics, and historic preservation, the rehabilitated Grand Avenue pedestrian bridge demonstrates the outcomes of effective collaboration and engineering excellence. With old and new features blended into a cohesive design, the bridge is not only a steadfast means to cross the river, but also a beautiful outdoor space that invites commuters to stay awhile, to appreciate the good things downtown has to offer, and to build community on the bridge.

Dan Sydow, PE is Structural Engineering Group Manager of Ayres’ Midwest Transportation division. He served as project manager for the Grand Avenue pedestrian bridge rehabilitation. A longtime member of ACEC Wisconsin, Ayres is a 300-person engineering and architectural firm based in Eau Claire; the company has four additional offices in Wisconsin, as well as offices in Florida, Colorado, and Wyoming.