Posted By: Amanda Inman in Blog,

Removing and preserving a 120-foot-long steel bridge is no small matter. The complications that come along with that historical element of a bridge replacement project are just as large.

Rock County and the towns of Turtle and La Prairie needed to replace a bridge built in 1910 that could no longer accommodate today’s transportation needs. Two vehicles could not cross at the same time on the 16-foot-wide deck. The bridge was posted for a maximum 10-ton load. Deterioration was evident from the concrete abutments to the overhead steel elements, despite faithful maintenance to keep the bridge in good condition.

Rock County turned to Ayres to guide it throughout the replacement process. The future of the old steel Pratt through truss bridge over Turtle Creek was clear: It needed to be replaced by a new structure.

The bridge was determined to be eligible for the National Register of Historic Places and was adjacent to a county park. The existing steel truss bridge was to be replaced with a three-span concrete haunched slab bridge.

In most cases, that would have been the end of the story of the old metal bridge. But some residents wanted to keep the old bridge, and that eventually added a rare dimension to an otherwise routine bridge replacement project.

Local resident Ken Luety was one of several parties who wanted to preserve the historic South Smith Road bridge. When the Wisconsin Department of Transportation (WisDOT) announced in 2019 that funding was available to help offset the cost of moving the old bridge, Luety applied and was selected as the bridge’s new owner.

Construction was complete in 2020.

Out with the Old 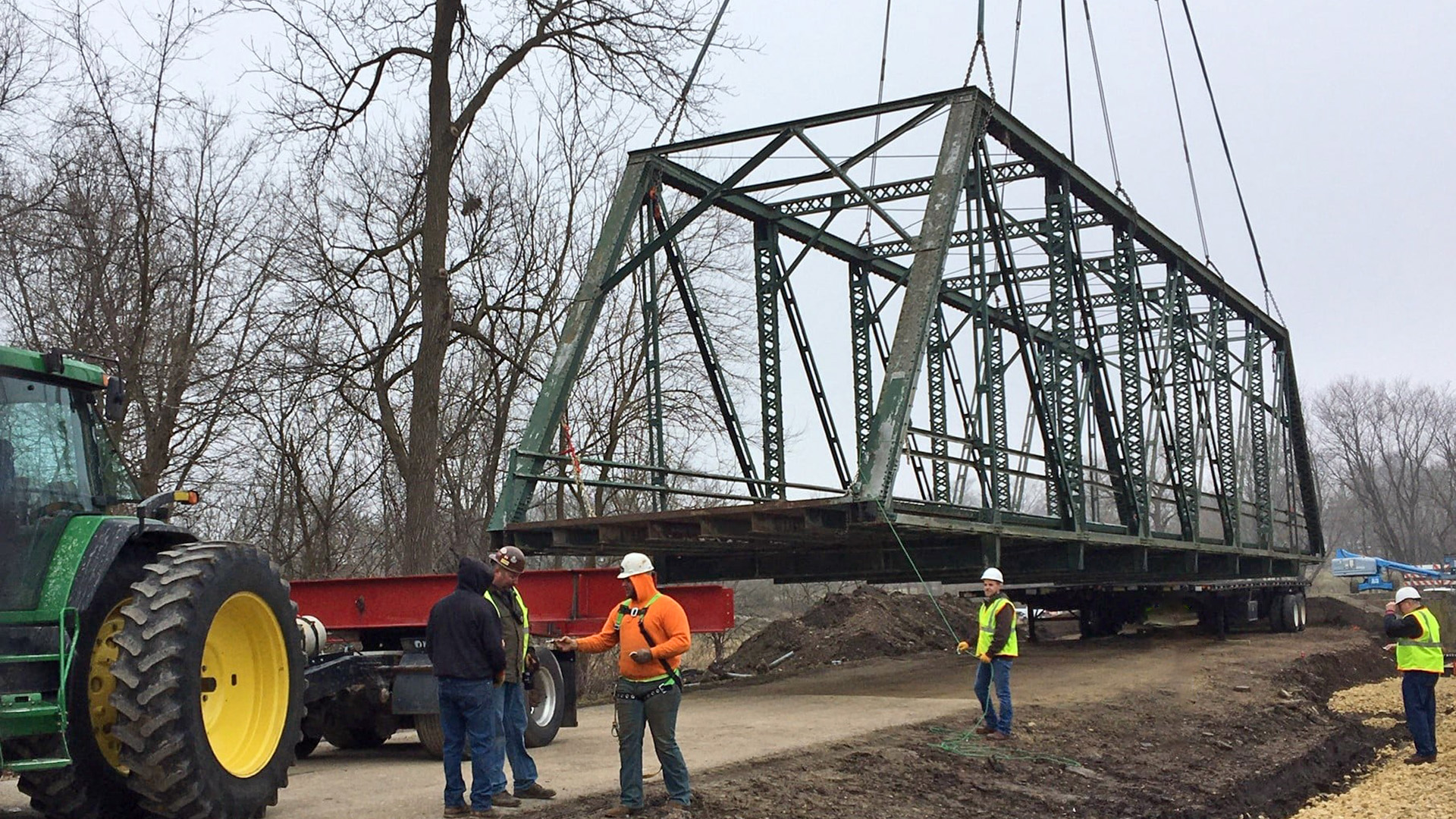 It takes a big crane to lift an old steel bridge. Luety’s group brought in more than 20 truckloads of stone to provide a foundation for a 550-ton crane. The crane itself had to be transported on nine trucks and assembled on-site using a 35-ton crane.

Approximately 8,000 pounds of rigging was used to attach the bridge to the crane. After about three hours’ work, the crane slowly lifted the bridge out of position and then lowered it on to two semitrailers. The rig was attached to a farm tractor and pulled down the road to a short-term parking space. A few days later, Rock Energy temporarily removed a power line in the bridge’s proposed path, and a second farm tractor pulled the rig across a field to a park-like setting on Luety’s rural property.

The South Smith Road bridge project demonstrates just how successful a project can be when a consultant listens to the desires of its client and the community.

The old steel historic bridge is now part of a snowmobile trail on Luety’s property and is open to visitors year-round. He only asks that people first get permission to access his land. A Facebook page, Historic Smith Road Bridge, offers pictures of the move, the bridge in its new location, and a means of contacting the Luety family.

In with the New 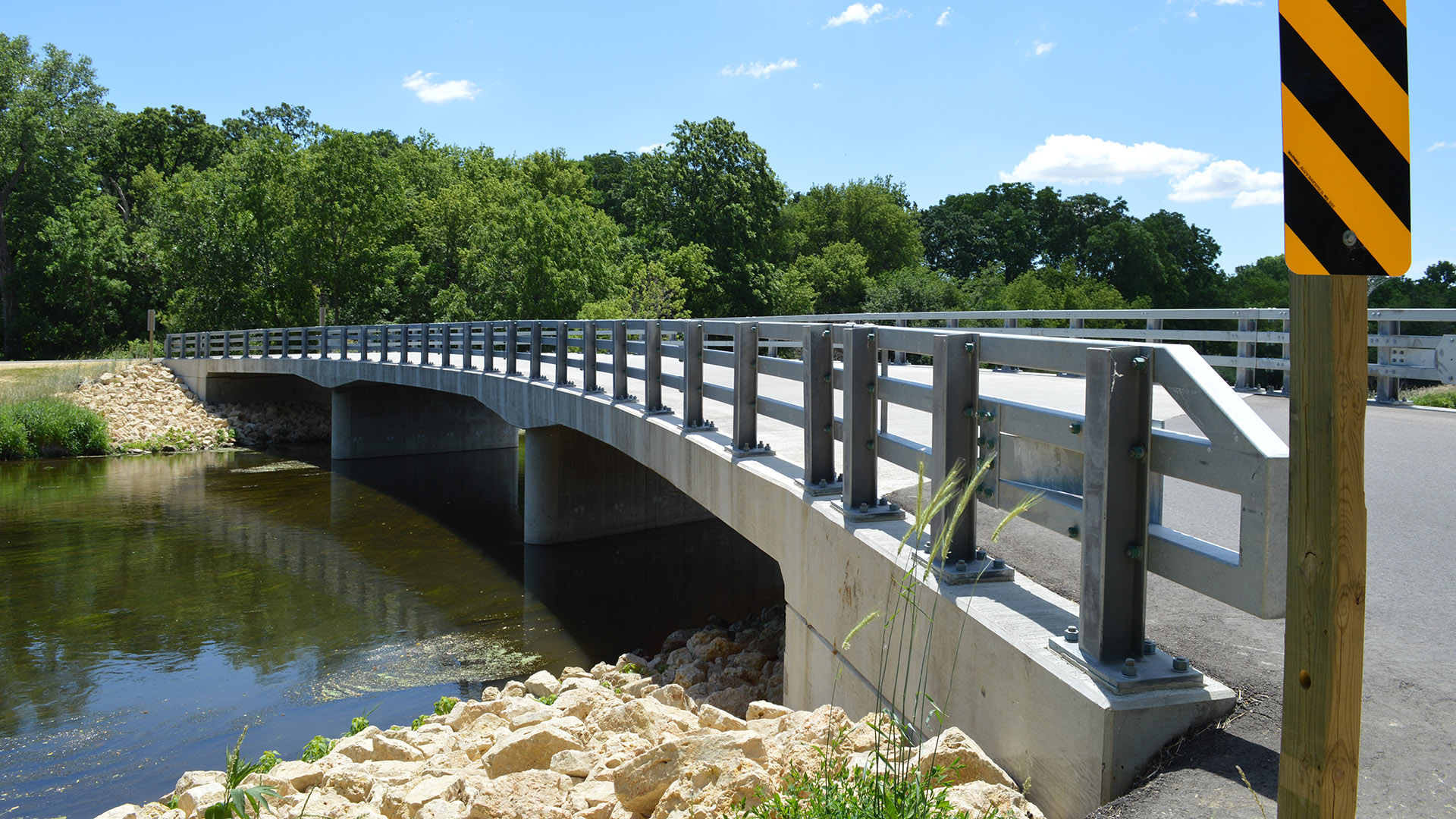 With the old bridge safely removed, construction on the replacement structure began. The project featured a sharp curve at the west end of the old bridge. One of the project goals was to eliminate that curve to benefit drivers. A long, sweeping curved approach could have added 400 feet to the roadway, and that translated into more disruption for local property owners and increased cost. Ayres’ design shifted the bridge just enough to still provide a substantial improvement while modifying that sharp curve.

The 2017 determination that the old bridge was eligible for the National Register of Historic Places was just one step in a long process.

The coordination process had to be handled skillfully – mitigating the removal of a historic bridge can take a long time, much longer than a typical bridge project schedule. In the end, the environmental process on the project took about four times as long to complete. The final environmental document was about double the size of a typical bridge replacement document.

Preserving and reusing the historic steel truss bridge over South Smith Road in Rock County added major complexities and coordination time to the replacement of the structure over Turtle Creek.

However, the value of saving that bridge was priceless to those involved with the project.

Amanda Inman, PE, is a transportation project manager at Ayres and served as project engineer and environmental coordinator for the South Smith Road bridge project. Amanda is a graduate of the ACEC Wisconsin Leadership Institute Class of 2021.

Ayres, a long-time member of ACEC, is a team of 350+ innovative problem-solvers nationwide, standing with integrity behind thousands of projects that strengthen communities and our country’s infrastructure, economy, and environment. Ayres is based in Eau Claire; it has four additional offices in Wisconsin, as well as offices in California, Colorado, Florida, Minnesota, and Wyoming.