Posted By: Vernon Witthuhn in Blog ,

Eight years ago, the City of Waukesha sought to replace its tired and inefficient wastewater treatment facilities with cost-saving, energy-efficient equipment. The City set out on a major capital project ($44.6 million) that would lead to the upgraded and newly branded Waukesha Clean Water Plant.

Treatment in the activated sludge system employed two types of blowers (five in all), both of which were dated and inefficient. The facility also included four digesters for treatment of wastewater solids: two 90-foot and two 55-foot units. These digesters had operational issues with solids collecting at the bottom of the tanks. After digestion, biosolids were stored in a tank until full, at which time they were dewatered with belt filter presses running 24 hours-a-day until the tank was empty. This operation was labor intensive and exerted a heavy energy demand on the aeration system.

Though the plant had an automated control system, it too was antiquated and lacked the capability to adapt to changing treatment needs and conditions. 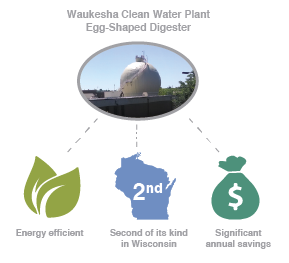 To address the solids issues in the existing digesters while minding the tight site constraints, a new, uniquely-shaped (egg) digester tank was designed, to be constructed within the footprint of one of the smaller tanks. The treatment capacity of the egg-shaped digester (ESD) allowed the other smaller tank to be repurposed for storage of liquid from dewatering, enabling it to be fed slowly back into the plant, greatly reducing the energy costs.

A dewatering centrifuge replaced the belt filter presses because it can be more easily started and stopped, allowing the dewatering process to be performed during normal working hours.

New controls were installed to allow for fully automated operations and remote monitoring of equipment in response to changing conditions, making it ideal for hours that the plant is not staffed.

These improvements decreased labor costs and improved plant operations and are expected to reap an estimated savings of more than $100,000 annually.

Though a uniquely-shaped digester is an interesting and eye-catching design element, it’s the functionality and savings of the design that are grabbing the attention of City officials and residents today.

The unique shape of an ESD reduces deposition of solids in the bottom of the digester, an issue with the City’s old digesters. According to one of Strand’s project managers, Vern Witthuhn, P.E., “The enhanced mixing efficiency of the ESD results in greater digestion and reduces the amount of sludge to be dewatered and increases the production of reusable biogas. This increased biogas volume can be used to generate electricity, fuel vehicles, or be injected into a Utility’s natural gas pipeline. The enhanced digestion further reduces the amount of material that needs to be hauled and disposed of.”

The 1.1-million-gallon ESD is only the second of its kind in Wisconsin.

Sustainability was another project goal. From the energy-efficient turbo blowers and new control system, to the repurposing of a one of the digesters as a storage tank, to a centrifuge replacing existing belt filter presses, to increased production of biogas with the ESD, the City has demonstrated its commitment to the environment.

Positive Ending to a Long Road Brings Optimism for the Future

With a price tag of $44.6 million, the City of Waukesha has made a significant investment in its renovated Clean Water Plant. To date, City of Waukesha Mayor Shawn Reilly believes the blend of design, relative ease of maintenance, and potential for operational cost savings is an unbeatable combination for the City.

Vernon C. Witthuhn, Jr., P.E., of Strand Associates, Inc.® (Strand), served as Assistant Project Manager during planning and design of these upgrades and as Project Manager during construction. Vern has a Master of Science degree in Civil and Environmental Engineering from the University of Wisconsin-Madison and has been with Strand since 2002. Strand has been providing exceptional civil and environmental engineering service to clients since 1946.