Posted By: Bruce Morrow in Blog,

Many communities have them: Cool spaces that no longer function to their full potential. Downtown Sheboygan had one of these spaces, and the City also had very good reasons to fix it.

Mead Library Plaza was introduced in the 1970s with a bang. The City hired renowned landscape architect Lawrence Halprin to design what became known as the historic Plaza 8 Fountain for a newly renovated pedestrian mall area. The goal was to help reinvigorate the downtown business district. Unfortunately, the pedestrian mall did not produce the intended results, and in the 1990s a major redesign removed the pedestrian mall and reinstated Eighth Street as a thoroughfare. 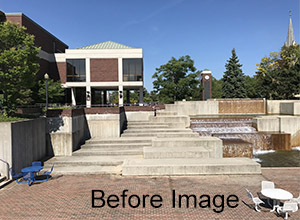 Mead Library also underwent a major remodel in the 1990s, resulting in the library’s main entrance being relocated from the east side of the building to the north side. The relocated entrance left a sea of pavement with stunted trees across the entire front of the building that still directed users to a nonexistent entrance. Changes also were made to the water fountain at that time. Stairs were removed and walls added, limiting access and views of the fountain. This resulted in a community that rarely spent time in either place – the fountain area or the plaza -- and surrounding areas became disconnected.

Downtown Sheboygan is experiencing a resurgence. The public sector has been investing in the downtown. Reviving Mead Library Plaza allowed for improved connections to these investments and set the library up to better serve as a western anchor for reviving the downtown cultural district with the new City Green events venue in the center and the John Michael Kohler Arts Center as the east anchor.

The Plan Needed To:

Stepping Back in Time

To update the plaza and fountain spaces, the Ayres team needed to go back in time. Original site plans were located, and elements from the original design were revived. Stairs were added back in to provide a second entrance/exit point. Brick and concrete walls, added in the 1990s, were removed to improve the views of the fountain.

The water fountain was not the only local treasure in this plaza space that got new life. While many communities have chosen to remove similar old fountains, Sheboygan decided to preserve this local landmark along with other art located at the site. 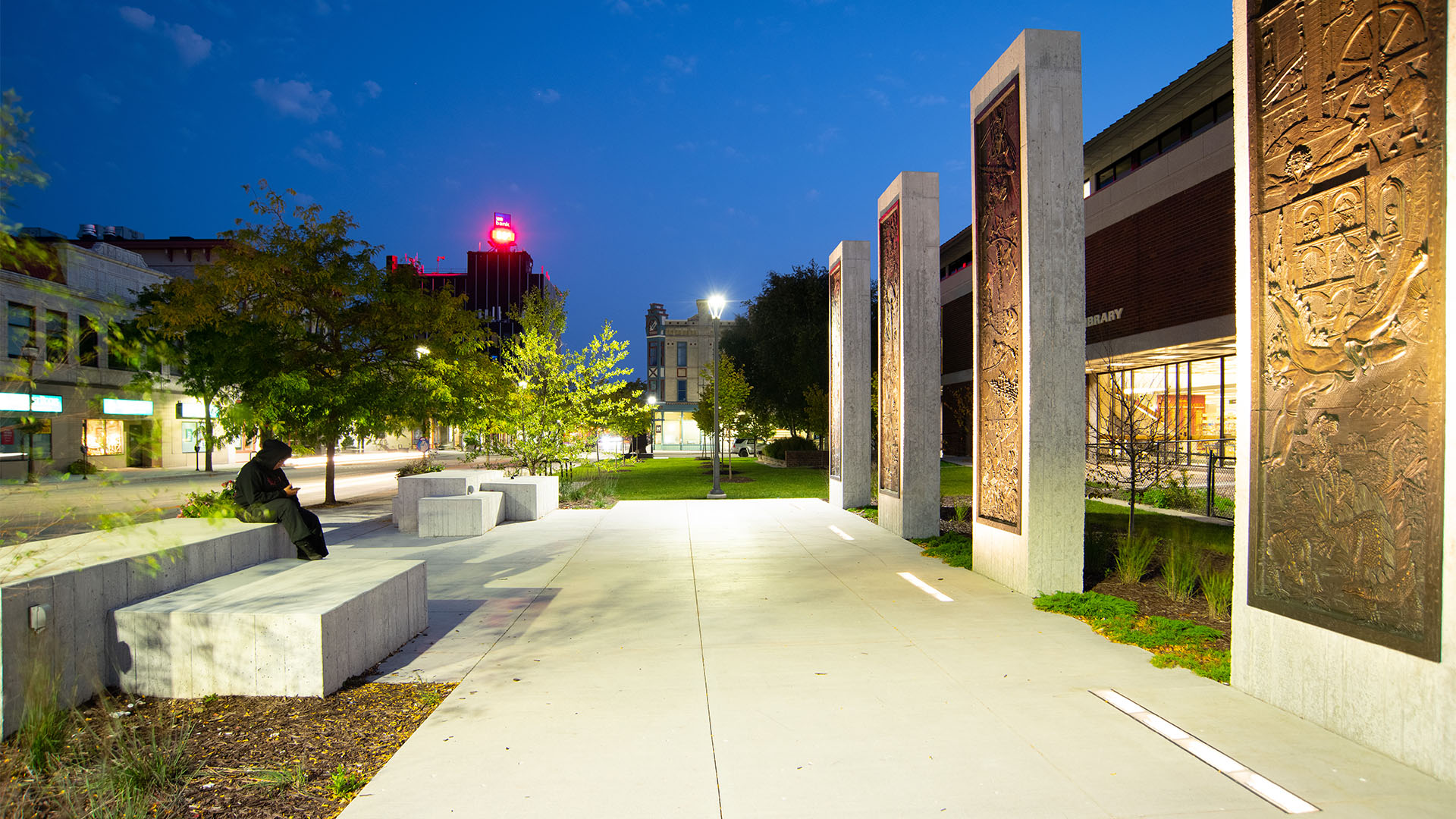 A non-working clock tower at the rear of the fountain had themed bronze relief panels located on each side. The “History” panels depict prominent moments from Sheboygan’s history, and the “Literature” panels depict beloved characters from famous children’s books. The brass relief art panels, designed by a local artist, had been essentially hidden behind the fountain. The panels were removed from the clock tower and moved to a more prominent location and now form the backdrop for the plaza entry that welcomes users to the library off Eighth Street. Longtime residents commented that they did not realize the panels existed until they were relocated.

Improving the function and feel of a space makes it more valued and appreciated by community members. This sense of pride helps to promote the economy, especially in a prominent downtown area where large numbers of people benefit from the investment.

For Sheboygan, the previous plaza space was unwelcoming and therefore underused. The vast amounts of pavement had a hard appearance, lacked a sense of pedestrian scale, and needed shade to provide comfort for visitors.

Incorporating the art panels, along with more green space, gave the plaza a newer, softer, and more inviting look that led to greater use and appreciation for the space.

The result is repurposed, multi-use spaces that the community can better utilize.

Now more than ever, outdoor spaces are being valued. Providing welcoming and safe outdoor gathering spaces that can provide peaceful experiences will help communities not only survive, but thrive and grow.

Bruce Morrow, PLA, is a senior project manager in the Landscape Architect group at Ayres and has been providing planning, design, and implementation services since 1995. Ayres, a longtime member of ACEC Wisconsin, is a team of 300+ innovative problem-solvers nationwide, standing with integrity behind thousands of projects that strengthen communities and our country’s infrastructure, economy, and environment. Ayres is based in Eau Claire; it has four additional offices in Wisconsin, as well as offices in Florida, Colorado, and Wyoming.