Posted By: Zach Simpson in Blog,

The City of Janesville embarked on a multi-year, multi-phased strategy to revitalize its downtown and ancillary corridors to improve the quality of life for its residents and attract and promote activity in the downtown area. The planning strategy for this downtown revitalization started in 2008 with a Downtown Vision Plan. In the years following, several studies were completed, including the Rock Renaissance Area Redevelopment and Implementation Strategy (ARISE), which was based on identification of properties that could serve as catalysts for downtown redevelopment.

Strand Associates, Inc.® assisted the City with the Town Square project, which is defined by six distinct stages designed cohesively. Construction contract documents were developed for each stage, balancing the availability of funds and potential funding mechanisms with constructability, including site and river access and permitting requirements.

The first, and perhaps the most significant site identified within the strategy, was referred to as Catalyst Site 1. The site included a brownfield site and two connected, failing parking structures that spanned the Rock River. Catalyst Site 1 was identified as the proposed location for a future town square that would serve as the epicenter for downtown. The first stage of the West Town Square project was removal of the remaining parking plaza structure at Catalyst Site 1 that spanned the Rock River.

Construction of the West Town Square began with West Town Square South. Major project components completed during this stage included construction of access to the river via steps with integral LED lighting, a floating dock, green space, relocation of a portion of the Ice Age Trail, drainage infrastructure, various sitting areas with amenities, LED pedestrian lighting, and utilities and walls for an interactive water feature, in anticipation of the additional private funding.

Transforming River Street into a festival street, with a narrow street section to be shared by cyclists and autos, and angled direction-specific parking, which provides parking for a typical day and dedicated areas for tents or vendors during events.

The remaining portion of the Ice Age Trail was relocated. This included two sections of elevated precast trail with cable railing and integral in-rail lighting, a bio-infiltration basin, reconstructed parking area, a drinking fountain, and hardscaped areas and amenities coordinated with the other West Town Square stages. 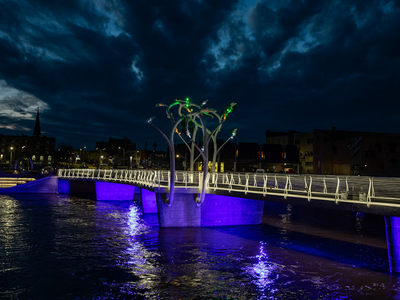 The City worked with private donors to fund a pedestrian bridge across the entire Rock River that was designed to commemorate the significant industries and events that shaped the Janesville community and included a symbolic sculpture pointing towards continued growth and renewal of the city. This bridge is the principal feature of the Town Square site and provides a connection between the West and East portions of the Town Square.

Town Square was conpleted with the construction of East Town Square. Key features included an activity deck to support outdoor exercise such as yoga, a shaded plaza area with tables that give users a space to work outside or sit and have lunch, an artistic donor wall with custom sculpture that recognizes all who have financially supported the Town Square project, a pavilion structure, and a gas fire pit table.

A Place to Gather

The Town Square project met the City’s goal of providing the community with a place to gather and recreate downtown. As a result, the downtown has recently experienced an uptick in redevelopment and a facelift for several of the main travel corridors, providing further momentum to continue the City’s efforts with revitalization of Janesville’s downtown core.

Zach Simpson, PE, is a Project Manager at Strand Associates, Inc.® in Madison. Strand Associates is a long-time ACEC Wisconsin member. Established in 1946, Strand is a thriving corporation with 12 offices and projects in 48 states.