Perseverance and Flexibility Lead to Improved Water Supply for Elkhorn

Posted By: Doug Snyder in Blog,

The City of Elkhorn (City) prepared a water master plan for its system in the year 2000. This study identified the need to replace, or reconstruct, the Centralia Water Facility before the year 2015. The master plan report concluded that a failure of the old facility would require the Water Utility to impose water use restrictions for all City residents during the peak demand summer months.

In 2012, the City and Baxter & Woodman updated the water supply needs portion of the master plan and assisted the City in locating and purchasing property for three water well sites. Each site separated by several thousand feet to prevent hydraulic interference between the wells. 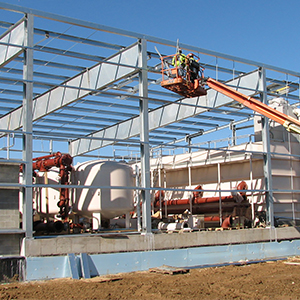 In early 2013, the City awarded a contract for the drilling of two 16-inch diameter, 1,800-foot-deep sandstone wells—Well 9 and Well 10. The final construction matched the anticipated plan, but ultimately took eight months longer than planned to drill and test the wells. Water quality testing of the well water confirmed the need for the planned filtration and softening equipment, but also now triggered the need to add arsenic removal treatment to the facility.

The project encountered challenges in early 2014. The long duration of well construction led to a delay in Wisconsin Department of Natural Resources final approval of the water treatment equipment. In May 2014, project bids came in at $10.1 million, including an addition to the Utility office. Several newly elected City council members, unfamiliar with the project’s history, chose to reject the bids.

Then, in 2015, the same council revived the project with a phased approach to the original design. The City reapplied to the Wisconsin Public Service Commission for authority to construct the improvements, and again obtained a Safe Drinking Water Loan for the project using the newly adopted requirements of the American Iron and Steel Act. The revised design would only bring Well 9 online. The building for Well 10 and the associated water main, treatment units and second clearwell would wait for a future phase.

This project demonstrates how preparing and following a realistic, long-term phased plan with a flexible approach can lead to a successfully completed project. In early 2016, the City bid the reduced-scope project, and the bids came in at $ 9.0 million. The City is currently operating the facility. A wellhead protection plan and ordinance protects all three of Elkhorn’s new and future well sites.
Elkhorn's new treatment facility includes:

With the completion of this project, the City will provide a source of clean, reliable drinking water for many future generations of Elkhorn residents and businesses.