Posted By: Lisa Fleming in Blog,

When the USH 53 bypass opened in 2006, the roadway divided four quadrants of undeveloped land from the bulk of the City of Altoona. For years the City worked to attract business to the four sectors. The southeast and northeast quadrants, the first to be developed, attracted an outpatient surgical hospital, medical offices and several other businesses. A Woodman’s supermarket went into the southwest quadrant in 2015.

The goal for the northwest quadrant was to be as much a public space as a business site. The City had a vision of creating a new “front porch” for the City in the quadrant, a place where people could live, work and play in an environment that took full advantage of the Eau Claire River that flows along the edge of the site.

The City of Altoona’s River Prairie project encompasses the remarkable transformation of a largely undeveloped highway interchange area in 2014 to a bustling center of commerce and recreation today. It provides new streets, utilities and public spaces that have attracted extensive commercial development. About 95 percent of the $20 million infrastructure build-out has been completed, and private development has snapped up available space as quickly as it has become available. The development successfully and attractively combines recreation, a market square, retail, eateries, lodging and a place for the arts to thrive. 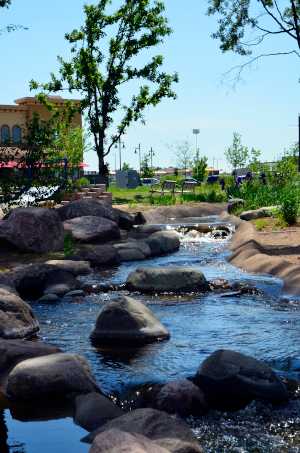 A guiding principle from the start of the project was the placemaking concept of the “Power of 10,” which states that people are more likely to spend time in a space if it provides at least 10 things for them to do. The planning phase involved inviting scores of community members to focus groups to work toward conceptualizing those 10 things to do. The goal was to provide features that are functional, beautiful and provide interesting opportunities to interact with the space.

The public park is front and center in the development. It includes a water feature, splashpad, interactive play area and more than five staging areas for events. Each area is unique in its own right but harmonizes with the overall site. The site is ADA-compliant throughout so everyone can use it.

Sustainability was a key component of the design. Natural wood and stone are incorporated into the park design, along with perennials that need little maintenance, choke out weeds and look good even when dormant. The development provides easy access to the Eau Claire River, opening up new recreational opportunities for residents and visitors.

Many hurdles were cleared on the way to this rapid change: wetland reviews, endangered species, the shadow of a nearby dam and major modifications of the adjacent USH 53 interchange – a nine-month design and construction achievement that would normally take two years. Innovation was embraced at every turn as trees were preserved; river water was used for irrigation; roundabouts and back-in parking were implemented; an artificial stream was created and electrical power, Wi-Fi, and audio were made widely accessible in public spaces.

The City of Altoona has stated that the use of the park and surrounding development has exceeded its expectations by at least 10 years. The park is constantly in use (40 weddings were held in its various venues in the park’s first year), and little vacancy exists in the commercial development.

River Prairie has been transformative for the City of Altoona, gracefully merging a business development with a public park unlike any other in northwest Wisconsin.

Lisa Fleming, PE, is manager of municipal services for Ayres Associates and was the project manager for the River Prairie project. Ayres Associates, a longtime member of ACEC Wisconsin, is a 300-person engineering and architectural firm based in Eau Claire; it has four additional offices in Wisconsin, as well as offices in Florida, Colorado, and Wyoming.