Posted By: Jeffrey Steiner in Blog,

The before-and-after transformation is striking. Just a few years ago, what’s now a stunning, state-of-the-art public library being lauded for its modern design and purposeful integration with the surrounding park-like environment was a former foundry full of toxic contaminants and decorated with overgrown vegetation, broken windows and offensive graffiti. 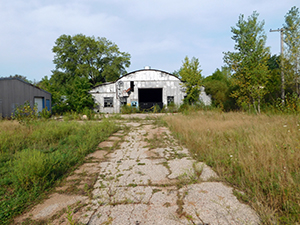 The former Waunakee Alloy Castings Corporation ceased operations in 2009 – its conglomeration of tin and metal buildings sitting idle ever since. Some were filled with old wooden casting forms up to the rafters, others contained leftover foundry waste, and many had visibly open areas with rotted and missing sections of roof – all of this surrounded by a chain link fence. And adjacent Six Mile Creek, which is completely visible now and a beautiful amenity, was overgrown with trees and brush, essentially invisible to passersby.

The property’s interior condition was in as much disarray as its unsightly outward condition – and environmentally troubled to boot. That’s when the small but growing Village of Waunakee reached out to Ayres, which helped them secure funding (more than $650,000 in grant funding and over $1 million in remediation assistance from the EPA’s START program) and provided environmental staff to remediate the site, demolish the building and prep the space for redevelopment.

During the hazardous materials site assessment, the environmental team came across a pile of discarded electrical capacitors that were leaking polychlorinated biphenyls or PCBs, a group of chemicals no longer being manufactured because of their potentially harmful health effects. Worse yet, they discovered spilled elemental mercury – also highly toxic – on top of the leaking PCB-containing electrical capacitors.

The fact that the contamination wasn’t just mercury or PCBs enormously complicated the cleanup as there was seemingly no permittable way to properly dispose of this mixed waste.

Federal regulations advise disposing of PCB waste by incineration but prohibit incineration of mercury. Removing these substances, as well as other hazardous materials inside the buildings, was a delicate operation that required Wisconsin Department of Natural Resources and U.S. Environmental Protection Agency involvement and cost more than $1 million.

With the time-critical removal action complete, Ayres conducted a site investigation and prepared a remedial action options report. The firm also completed a remedial design report, a materials management plan to manage the soils and cap the site, wrote specifications for demolition of the buildings and developed a Toxic Substance Control Act self-implementing PCB cleanup plan for the PCB release inside the building.

Ultimately, with the soils remediated, the ground capped from any residual contaminants and all health, safety and environmental risks mitigated, the Village could, at long last, proceed with building a new public library on the site. Construction on the new 40,000-square-foot library began in late 2017 and concluded with a public opening of the new library on August 1, 2019.

The new library – which set records for attendance and circulation its first month – makes purposeful use of the land it’s on. It mimics the creek, which runs serpentine along the site, and perfectly complements the topography of the space.

Neighboring residents’ former unsightly view of dilapidated industrial buildings has been upgraded to one featuring a community park, a manicured lawn, and a library surrounded by green space that features local artwork and high-quality architecture. Additionally, a new recreational trail cuts through the space and connects users to other parts of Waunakee.

The Village of Waunakee has stated that the impact of this complex environmental project has been profound. The project took on a litany of community issues and solved them masterfully – from eliminating blight to improving social capital to making way for a new and improved public library that will serve community members for generations to come.

Read More About the Project

Watch a Video to Learn More

Jeff Steiner, PG, PH, CPG, is a hydrogeologist at Ayres and served as project manager for the Waunakee Alloy Site Conversion project. With 300+ innovative problem-solvers nationwide, Ayres, a longtime member of ACEC Wisconsin, stands with integrity behind thousands of projects that strengthen communities and our country’s infrastructure, economy, and environment. Ayres is based in Eau Claire; it has four additional offices in Wisconsin, as well as offices in Florida, Colorado and Wyoming.

Attend the 2021 Transportation Improvement ConferenceFebruary 10, 2021 Working Together for Solutions that Better CommunitiesFebruary 9, 2021