Saving Energy Across Wisconsin One Light at a Time

Posted By: Mike Scarmon in Blog,

The new technology of LED lighting first emerged for mainstream use in the late 2000s, and LED industry standards have changed continuously ever since. In recent years, LED technological standards have improved substantially, driving a more competitive market that produces higher-quality fixtures with better performance, decreased energy consumption, and a lower initial purchase cost.

The Wisconsin Department of Transportation (WisDOT) knew it needed to take advantage of this new technology but found its lighting standards to be antiquated. Furthermore, the outdated standards prevented WisDOT from taking advantage of the lower contract pricing now available on the market.

Prior to 2018, WisDOT’s Bureau of Traffic Operations (BTO) had already retrofitted an estimated 24% of the nearly 21,000 individual fixtures along highways, intersections, bridges, tunnels, park and ride lots, weigh stations, and rest areas. More than 15,850 additional lighting fixtures needed to be converted to energy-saving technology, a total of 75 percent of WisDOT’s roadway lighting.

WisDOT teamed with KL Engineering to devise a plan that would implement the conversion, or retrofitting, of these remaining lighting fixtures across Wisconsin. Rather than trying to develop a retrofitting solution based on the outdated standards, the project team analyzed the specification standards themselves in search of new energy efficiencies and cost savings. 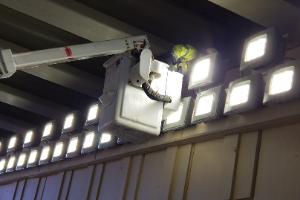 The critical first step toward upgrading WisDOT’s roadway lighting system was to modernize the specification standards, leveraging advancements in LED technology. The new specifications offered more detailed product definitions, requiring lighting vendors to provide higher quality products at competitive pricing. WisDOT re-bid purchasing contracts based on the re-engineered specifications and in turn saved $954,000 in material costs – a 50% savings – which was then used to retrofit 4,000 additional LED fixtures than originally planned.

By transitioning to LED fixtures, WisDOT’s annual energy consumption will be reduced by 9,475,000 kilowatt hours – a nearly 50% reduction in energy usage per year. That translates to annual savings of $1,184,700 in direct energy costs across the state.

Because LED fixtures require less maintenance, the retrofitting will save WisDOT an estimated $335,000 annually in maintenance costs alone. By thoroughly understanding their client’s needs, KL Engineering formulated a plan that allowed WisDOT to leverage a U.S. Department of Energy-based Focus on Energy rebate program that resulted in $489,000 in eligible rebates across the state.

Overall, this intensive $8.7 million-budget project will save enough money that it will provide a projected full return on investment in less than 6 years. Moving forward, WisDOT is projected to decrease its spending by $1.5 million every year on energy and maintenance of streetlights.

Through careful planning, technology upgrades, an innovative re-engineering of specification standards, and competitive re-bidding for fixtures and installation, WisDOT realized significant energy savings and cost reductions, while bringing a new level of visibility and safety to drivers and pedestrians. The entire WisDOT system is expected to be fully LED in 2-3 more years.

Mike Scarmon, PE, PTOE is a Senior Project Manager for KL Engineering, Inc. He led the WisDOT Statewide LED Retrofit Implementation Plan and heads KL Engineering’s Traffic Team. With four locations across Wisconsin, KL Engineering provides transportation engineering expertise with an unwavering customer service ethic to public and private clients in Wisconsin and surrounding states. KL Engineering is an active ACEC Wisconsin member and our President, Kim M. Lobdell, PE serves as the immediate Past Chair of the Board of Directors.